We thought it would be interesting for you to know a little about the history of Khulo, which is located in the middle of the Adjaran mountains. Khulo is also the area where Glamping Tago is located.
Khulo municipality is located 2.5 hours drive from Batumi, which, in total, consists of 78 villages. This is a mountainous area of ​​Georgia, so it is worth noting that some of the villages are very difficult to reach. In a sense, we can say that many of them are disconnected from the outside world and the people living there cannot boast of even the elementary charms that a modern person living in a metropolis possesses.
Over the past few years, Georgia has made huge strides towards the development of the country and changes have affected not only the development of infrastructure or the country’s tourism industry but also the mindset of Georgians. But people living in such remote corners of Georgia like Khulo or any other villages out there were practically not touched by the new, “European spirit” of the country, which is understandable. Customs, culture, a simple way of life are preserved as much as possible in such places, so we can say with confidence that when visiting some of the villages it feels like taking a trip back in time!

Origin Of The Name Khulo

The old name of Khulo is “Khula”, which means the “Trading House”. In the middle ages, a caravan-trade road was going through this territory, which connected Samtskhe-Javakheti to the Adjara-Black Sea Coast with Goderdzi Pass.

The history of Khulo municipality does not have huge archives and, unfortunately, is poorly documented. But there are several interesting facts related to different historical periods that we know:

The Khulo area has been inhabited since ancient times, almost from the Bronze Age. Cult monuments such as the Thilvani Menhir, which is a simple megalith building-vertical column with height about 20 meters. Archaeologists think that it was connected to a funeral ritual. And also the Kaloto Altar have been found here, which confirm the existence of civilization in the Khulo region in pre-Christian times. The site was built up in the Middle Ages, as evidenced by the many surviving churches, castles, or medieval arched bridges.

In the 16th century, the Ottoman Empire pursued an active policy of conquest in several regions of the world at once. Georgian lands became one of the directions of Ottoman expansion on the eastern coast of the Black Sea. However, the scattered parts of the former Georgian kingdom found themselves in the orbit of the Ottoman Empire’s influence at different times, and the forms of their relations with the Ottoman state were also different. As the whole region of Adjara, Khulo was also part of the Ottoman Empire, during which the region was converted to Islam.

Khulo’s population, largely Islamized under the Ottomans, diminished dramatically under the Russian oppression of Islam in the 1870s.

In April 1929, during the Soviet rule, the Muslim villagers of mountainous Adjara rose in arms against compulsory collectivization and religious persecution. The Soviet troops were invoked and the revolt was quickly put down. Thousands of Adjarians were deported from the republic.

Khulo district was established in 1965 by its current borders, and according to the current administrative-territorial arrangement, it is called Khulo municipality.

A series of floods and avalanches in the 1990s-2000s induced another wave of migration from the mountainous villages of the district.

It is very interesting that when visiting Khulo, it is unlikely that there will be a feeling that in this territory most of the population is Muslim. Most likely, you will realize this only the moment you hear a prayer.

One of the most important parts of the history of Khulo is the Khikhani fortress. Khikhani fortress was built in the twelfth century by Queen Tamar, and it was used to defend itself from the enemy and till the 19th century, it was a strategic stronghold, inaccessible from 3 sides. Still, it takes a long serpentine and 40 minutes walk to ascend the fortress from the mountain bottom. You will find lots of monuments: rectangular towers, walls, a bakery, a wine storage area, a water well, and a church.

Glamping Tago is a small start-up set on a mission to enhance mindful traveling, providing equal care and love to our guests, environment and team members.

We do so, by creating a comfortable space in one of the most authentic places in Adjara.

Turning it into a getaway where people can reconnect with themselves, step into adventures and begin new stories. 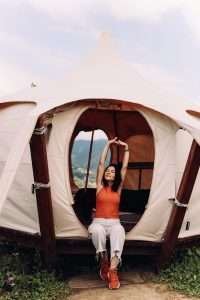 It often happens that travel can be stressful if not properly prepared for the trip. We decided to write for you the best tips for outdoor recreation using the example of Glamping Tago. All the tips below to ensure that your next trip is relaxing, calm, full of new adventures. 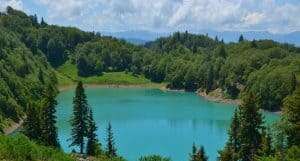 Adjara is one of the most picturesque regions in Georgia. In this post we will tell you about a place little known to many tourists and hidden among the Adjara mountains – this is Green Lake. Here you can get a lot of useful information, knowing which you can safely go on a hike! 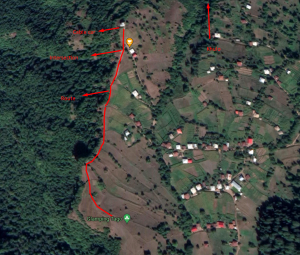 Glamping
How to get to Glamping Tago

We are happy to see that you are planning to pay us a visit at Glamping Tago! In the bellow post you’ll find all the needed information on how to get here.

If you have any questions or would like to add some information to this post,
feel free to send us a message!